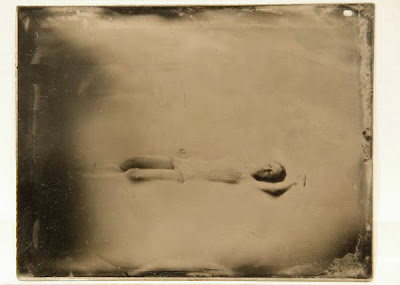 The imperfections inherent in the 19th-century wet collodion process only enhance the mystery and timelessness of "Kristen Floating," a unique 4" -by-5" -inch print by Mark Sink and Kristen Hatgi. (Images from Rule Gallery )
* Andy Warhol pictures that you haven't seen

For centuries, artists have turned to the past to inspire the new.

So it is with Denver photographers Mark Sink and Kristen Hatgi, who collaborated earlier this year on a series of 79 spellbinding, anachronistic-seeming images on view through Jan. 17 at the Rule Gallery. 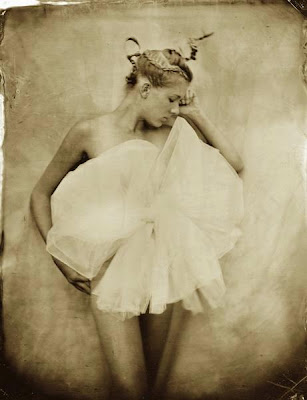 The two have revived the nearly forgotten wet-plate collodion process, which replaced the daguerrotype in the mid-1850s but was itself supplanted by less laborious dry-plate techniques a few decades later.

In the demanding collodion process, tin or glass plates are immersed in a silver nitrate solution, and then they must be exposed in the camera and developed in minutes while still wet. The negative images appear as positives when mounted on dark paper.
Figurative images, including "Charlotte in Bow," dominate the 79 wet collodion photographs on view at Rule Gallery.

Using a vintage 1850s camera, Sink and Hatgi traveled back into photographic history for this ambitious project, mastering the intricacies of the venerable technique while simultaneously updating and revitalizing it.

The enticingly dark-hued images that resulted — most 4 1/2 by 5 1/2 inches — have a sometimes murky, sometimes shadowy look, with serendipitous flaws and imperfections that are an inevitable part of this imprecise process.

Their intimate size and inherent inexactitude mean that viewers have to look more closely and spend more time with these photographs to fully appreciate their power — a welcome antidote to today's nonstop, instantaneous imagery.

Because viewers cannot help but associate the antique appearance of these photographs with some bygone era, the subject matter, however modern it might be, is inevitably refracted via the past. And, paradoxically, this intersection of past and present gives these pieces an unmistakably contemporary feel.

In many of these works, the two collaborators deliberately play up the ambiguity of time. Selections, such as "Rose in Water," possess a vaguely and probably deliberate Victorian flavor. 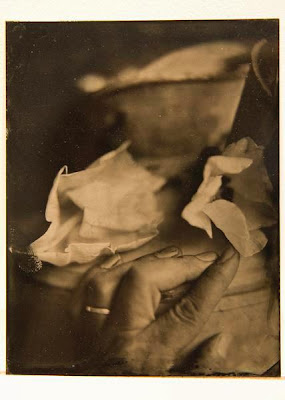 In addition, some of the apparel worn by the
A graceful quietude pervades Sink and Hatgi's "Datura in Hand." 5.5 X 4.5 inches
women, such as big, flowing skirts, also suggests the past, as do some of the accompanying props, such as the ungainly, old-fashioned brace in "Lauren With Leg Brace."

While these pieces cover an impressively broad range of subject matter, including still lifes and stunning landscapes such as "Small Aspens," most are devoted to portraits (including some self-portraits) and nudes.

The nudes (some recalling E.J. Bellocq's alluring portraits of New Orleans prostitutes in 1912) are suffused with freshness and sensuality, even eroticism at times, with nearly all of them coming off as refined rather than crass.

These figurative images are obviously staged, some with intriguing props, such as the odd, open hoop in "Sascha in Hoop Skirt," that add a kind of enigmatic air. Most are successful, but a few, such as "Mark and Kristen" go too far, becoming stagey and forced.

Sink, by far the better known of the two photographers, has been such a ubiquitous presence on the Denver scene for some three decades that it is easy to take him for granted.

It doesn't help that he is so prolific that much of what he does gets exhibited little if at all. The result is that viewers see a tree here and there, but never the full forest that is his extensive oeuvre.

This exhibition, along with a smaller, accompanying look at his portraits of Andy Warhol from the early 1980s, provide a strong reminder that it is time for a local institution to undertake a mid-career survey of his work.

Photography. Rule Gallery, 227 Broadway. An exhibition of 79 collaborative images by Denver photographers Mark Sink and Kristen Hatgi that make use of an obsolete yet still viable 19th-century process. Extended through Jan. 17. Noon to 5 p.m. Tuesdays through Saturdays. Free. 303-777-9473 or rulegallery.com.
Posted by Mark Sink at 12:54 AM 10 comments: 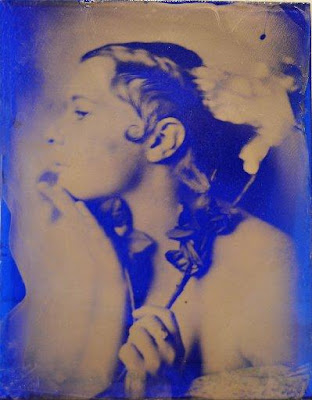 
More than a search for comfort steers photographers back in time to work in archival methods when the rest of reality is navigating a high-tech future at warp speed.

The need to experiment and understand unusual photographic techniques keeps things interesting, for one thing, and offers a reminder of the way in which humans have captured images since the 1830s.

That's the intellectual takeaway from "Light and Time," a generous selection of glass-plate images on view at Rule Gallery.

Area photographer and arts advocate Mark Sink and partner and photographer Kristen Hatgi have stepped back into the 1850s to work in the exacting - i.e., unforgiving - process in which a piece of glass is coated with the chemical stew called collodion, dipped in silver nitrate, put in the camera, then exposed as a photograph was shot. This needed to be done quickly, while the plate was still wet.

Sink and Hatgi have a knack for innovation and a penchant for the romantic side of photography, and here have parlayed that into a beautiful exhibition.

Part of that derives from the plates themselves: almost 80 small, blue or black glass objects displaying nudes, fanciful scenes, dreamy landscapes (lots of ethereal aspen here), and the skillful use of props and costuming. These shimmering works are displayed on shelves, lined up in a fashion that plays up the historical nature of the work on view. It has the air of a photography museum, exploring a process that had its day in the sun and is back for a brief reappearance.

That's the other element that adds to the appeal of "Light and Time." Gallery owner Robin Rule again has capitalized on the long, narrow confines of her space to install this show, and two others, to good advantage.

Behind the wet plate imagery she installed "The Untold Story," a small show of photographs by Sink from his days in 1980s New York. These are predominantly candid silver prints and chromogenic prints of Andy Warhol in a range of situations, at work and at play - another recollection of a decade in which the creation of art and the spirit of the time was different from today.

The standout image, though, is the 1988 photograph Man Dies, a shot of artist Jean-Michel Basquiat standing near a work bearing those words. Sink notes that he took the photo shortly before Basquiat's death, at a show at the gallery run by Vrej Baghoomian.

There is a sweetness to this piece, countered by the shock of realizing that the artist - so young, provocative and influential - was coming to the end of his very short life. 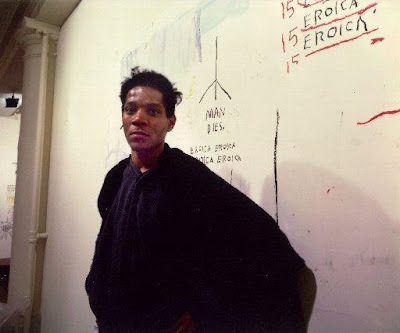 * What: Wet plate collodion photographs by Mark Sink and Kristen Hatgi, with 1980s portraits by Sink of Andy Warhol and others in the New York art scene.

LOS ANGELES – Bettie Page, the 1950s secretary-turned-model whose controversial photographs in skimpy attire or none at all helped set the stage for the 1960s sexual revolution, died Thursday Dec. 1tth . She was 85. 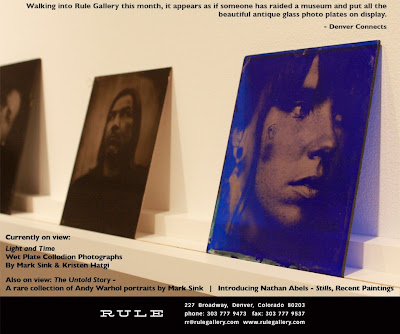 Walking into Rule Gallery this month, it appears as if someone has raided a museum and put all the beautiful, antique glass photo plates on display. It is surprisng, then, to notice one of the models standing in modern clothes at the other end of the gallery, chatting away with friends.

Indeed, photographers Mark Sink and Kristen Hatgi harkened back to the early photographic method of wet plate collodion to capture scenes that are both antique and modern all at once.

A popular technique for photography in the 1800s, wetplate collodion creates an image that is almost ghostlike on the glass plate, and the images at Rule sparkle as if lit from some mysterious source.

On the other end of the gallery, Mark Sink’s photographs of Andy Warhol fill the walls for the show Untold Story. Smiling, laughing, and posing, Warhol looks amazing and real in these photos, giving viewers who are just crazy about the man (like your truly!) a feeling of being right there with the famed artist.

The shows run at Rule through Jan. 10th and are definitely something to see.

Light and Time at Rule Gallery

Light and Time, in the front of Rule Gallery (227 Broadway, 303-777-9473, www.rulegallery.com) consists of small, wet-plate Collodion print photographs by Mark Sink and Kristen Hatgi that have been propped against the walls. The Collodion process is an early photographic method used by Civil War documentarian Matthew Brady.

In a jointly written artist statement, Sink and Hatgi observe that archaic chemical processes — including the Collodion procedure — that fell by the wayside in the late 19th century are making something of a comeback at the beginning of the 21st. This is no doubt a reaction to the digital revolution, of which these methods are decidedly not a part.

The diminutive photos on glass or tin depict men, women, landscapes and still-life scenes; they are very beautiful, if more than a little creepy. Many feature self-portraits of Sink and Hatgi, sometimes together and sometimes alone. The most striking are printed on blue sheets of glass that have been sprinkled throughout the display. The entire presentation is very engaging.

In the middle part of the gallery, in the exhibit The Untold Story, are some remarkable candid shots of Andy Warhol (and one of Jean-Michel Basquiat) that were taken by Sink during his youthful sojourn to New York a couple of decades ago. Sink has long talked about his close relationship with Warhol, and these intimate photos of the artist's private life prove that he wasn't just whistling Dixie. I have to admit, I was one of those who doubted him, but I guess I was wrong. The color photos show Warhol as he was in his everyday life not long before he died.

The festivities are finished off by Stills, which comprises edgy and awkward representational paintings done by emerging Denver artist Nathan Abels. Though technically not photo-realist in style, these paintings make wonderful companions for the photos from the other two shows.