A review of Delirium

A review of Delirium, curated by Mark Sink. Illiterate Gallery 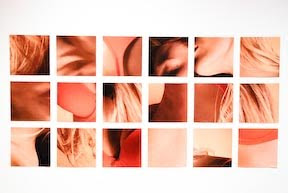 Delirium is aptly named, not simply as a way to describe the fantastic and diverse collection of artists that Mark Sink has collected for the show at Illiterate, but as a testament to the state of mind of the artists as well. 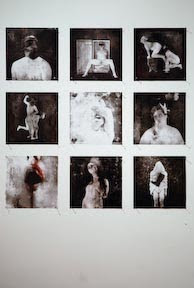 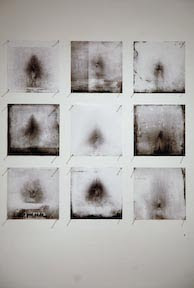 You really can’t go wrong with the phrase “maniacal excitement”.

When Mark Sink was asked to curate a show for Illiterate they did not ask him to do anything in particular and he hadn’t a clue what he was going to do. What came out was a show highlighting some of Mark’s favorite works. In his curatorial “howdy” speech he references having works in the show that he keeps around the house. That is to say this show is more like an intimate collection show than a typical group show.

This does beg the question what the role of curator is in this day and age. We recently had Eric Paddock, photography curator for the Denver Art Museum, speak at one of WWA’s fundraisers and he boiled down the role of curator quite nicely- that of the sifter. The one who sifts through all of it- the good, the bad and the ugly- to come out with what should be considered iconic and relevant. Quite a task actually, but then again so is doing the dishes- and we created a machine for that too, the dishwasher. Curators then can be considered the greatest in task saving appliances for the arts. Don’t have time to look at all of the art in the world? No problem, have a curator do it. Of all of the art appliances in the world, I would like to be on the record saying that I think curators are the most valuable.

Mark Sink in particular is Denver’s most undervalued art resource. He has been continuously been holding the IV bag of life saving fluids for our art scene for decades. He is the Cheshire cat of every art opening worth being at. Madly holding a cigarette, smiling a crooked smile a little too broadly for any environment he seems to find himself. Mark is a rare breed, a blend of celebrity art icon and street vagabond. He is the modern day high flying Nadar, but with street cred.

In Delirium he invites us into his living room to peruse through his personal collection. As you will hear in any lecture about modern or post modern art, buy what you like, you will figure out what it means (and if it was worth it!) later. Now we get to see what Mark Sink likes, a peek at the creept collection of persoanl loves. It is important to note that this show was not juried per say, in other words, not a “best of what we could get in a month or two” kind of show- but a glimpse into the collection of an artist and curator who has been collecting art for three decades, or since the Family Ties original first season on NBC.

So, the show. It is centered around Sylvie Tillman’s five foot grid of nine close up black and white anus images that are graphically nailed to the wall with larger than necessary tenpenny nails. Close-ups of what I imagine to be both men and women’s anuses, but honestly it’s hard to tell. The oddly disquieting part of these non-erotic sexual images is their, well, beauty. We are drawn to inspect parts of the human anatomy that most of us have never even glanced at to this degree. The sphincter in all its glory. Even as I write the word sphincter I see how it may be hard for some of you to see how there could be beauty here, but trust me it is. And this push and pull of subject matter versus aesthetic seems to be the glue that binds the images of this show. A seemingly irreverent subject matter couched in staggeringly simple, quietly beautiful images.

There is an aesthetic quality to these images that out shine the subjects themselves. That is to say the importance of craftsmanship is apparent in all of these pieces in this show. The images, like Mark’s own “medicine bottle” photogram, seem from another world in their stark beauty. The velvet like black tones wrought from the silver gelatin paper are a gorgeous backdrop for the sparse knifelike glowing whites that spring from the paper to express the contours of the bottle. The subject matter, again, rendered irrelevant in the face of such beauty.

The curatorial hang of this show is nicely developed, there is a series of three images on the wall; Zimmer’s Michelle, Wes Kennedy’s The Uberman, and an unknown photographer’s Victorian era ménage-a trios - really highlight the importance of the curator’s perspective. With these images grouped together we interpret one image based on the previous subject, much like a book. So, after seeing the Victorian taboo sex scene, we are set up to interpret the images to follow with same eyes, regardless of the intent of these image makers. So that Zimmer and Kennedy images are both imbued with an open sexuality that would not be present if it were not fore the brazen threesome that oh so recently just saw. Mark uses this to his advantage, playing images off of one another like the director of a mad improv dark comedy musical.

In fact the entire room is filled with an exciting sexual energy that seeps in to each and every image on the wall. I am not sure if this based on the images and proximity to one another, or simply the fact that we feel as though we are peering into Mark's bedroom.

The weakest pieces in this collection are the Harry Walters mixed media pieces. They feel quite disconnected from the rest of the show. In fact I thought they were part of a different show entirely, not part of Delirium. Part of this is that they make up 20% of the wall space, whereas the rest of Mark’s collection is made up of predominantly each artist being represented by one or two pieces. Coupled with the fact that the method of art making is so completely divergent from the rest of the show - it easily feels like something leftover from last month. Unfortunately, I want to like Walter’s pieces- it’s just that they are done in such a way that just seems clever without any real substance.

Delirium is a show that should not be missed. You will have to go soon to check it out though, on January 8 it will change. Rumors are that it will change into a virtual recreation of Mark’s living room. So something akin to cracked glass, dying plants, an 11x14 view camera or two and more gut wrenchingly beautiful art than you can throw a dart at will be on view until February. 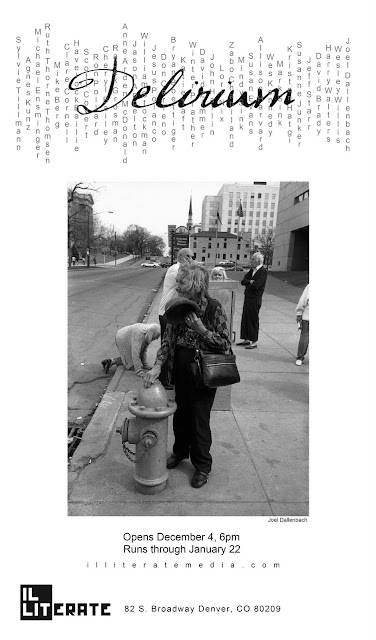 "life creates itself in delirium and is undone in ennui."

One of Denver's most celebrated photographer's, Mark Sink, opens his mind and private collection to the public, in an exhibition of works by mentors, colleagues, friends, disciples and himself.

I've been in a state of Delirium since I received a phone call 14 days ago while in New York from Illiterate asking if I would create a show at their gallery.